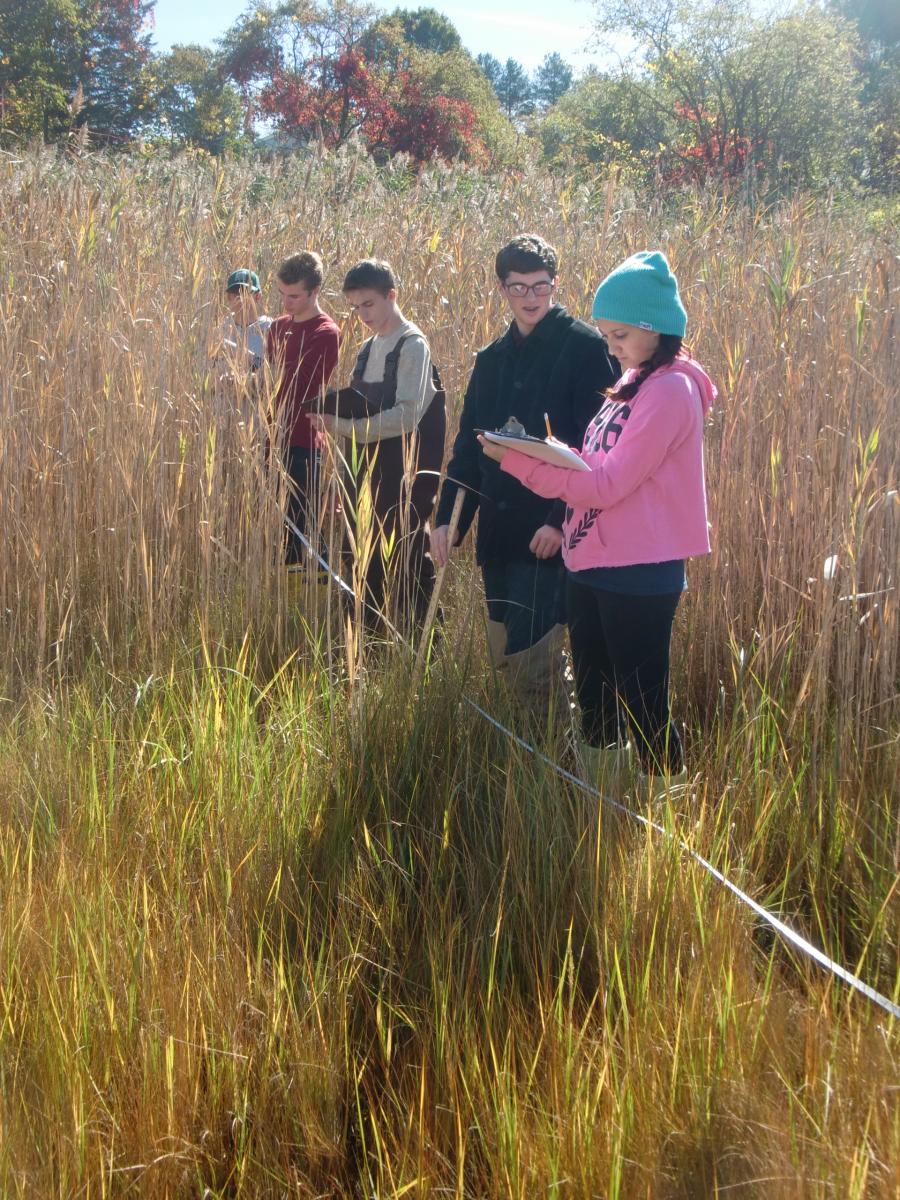 If you are visiting the PIE-LTER and you see a group of students on the marsh stationed at one meter intervals next to a long measuring tape, clipboards in hand, some of them disappearing into the very tall grass at one end of the tape, you are probably seeing participants in our schoolyard project “Salt Marsh Science”(SMS).  With the added benefit of getting out of the classroom and into their local environment, and getting wet and dirty in the process, these middle and high school students are investigating the invasive common reed, Phragmites australis, that is spreading into PIE area marshes.

Led by Mass Audubon’s David Moon (David is also PIE’s Education Coordinator) students from a dozen schools in the area annually map and study Phragmites at sites local to their schools; the first of these projects began in 1996.  In the SMS curriculum, students are guided to ask questions such as:  Is Phragmites spreading in our salt marshes? If so, how fast is it spreading? Where is it growing, and under what conditions? Is it affected by salinity?  Is it responding to restoration efforts?  If a road, culvert, or other tidal restriction is present, are fish communities also affected?

The curriculum includes classroom activities, identification sheets and keys for identifying salt marsh plants, fish, and some invertebrates, and data sheets for salt marsh field trips.  In the field, students identify and quantify Phragmites and other salt marsh plants along transects from the upland to tidal creeks.  They also measure salinity from wells located along the same transects.  Transects have permanent markers in place to ensure measurements are made at the same sites each year.  Some of these transects are at sites where other agencies are treating Phragmites in efforts to control it, so the  students’ data contribute to monitoring the success and duration of these efforts.  Where tidal restrictions are present, students also deploy traps upstream and downstream to collect samples for fish and crustaceans, and identify and count their catches in the field.  In the classroom, students analyze their data and add them to the data collected by previous classes.  They learn to explore the meaning of the data using tables and graphs.  They are asked to think about any patterns or trends they see and what those patterns might relate to.   Did the data they collected answer their questions or raise new ones?  Would their conclusions have been different if they had not had multiple years of data to consider?

Students in the SMS program learn first-hand the value of long-term datasets by comparing their findings to those of previous classes.  For example, at one school students are assessing changes at a site where tidal flow was restored. Monitoring began at this site in 1996, after a road was built across the marsh with only a small pipe installed under it for water flow.  Then in 2005, the pipe was replaced with two larger culverts that restored salt-water flow to the upstream side of the road.  Data collected annually from transects at one reference (downstream of the road) and three impacted sites (upstream of the road) allowed the students to compare the extent of Phragmites stands before and after tidal flow was restored.  At two of the upstream sites (Sites 1 and 3), a decrease in Phragmites was detected within 1-2 years of restoration.  At the site closest to the road and culvert (Site 3), Phragmites declined dramatically after that, and has been absent from since 2009.   At the other (Site 1), Phragmites has decreased steadily, but is still present.  At the third impacted site (Site 2), furthest upstream, change has been slower; it took many years of data collection to detect it, but by 2016 a declining trend seemed clear.

At the downstream reference site, recent data suggest there has been some increase in Phragmites. Since increasing flow under the road includes increasing downstream flow of fresher water, this may not be surprising.  But it offers new questions for inquisitive students!

Monitoring Phragmites is an ongoing project for SMS, but new educational initiatives that explore issues of climate change and sea level rise are underway.  These include mapping of the major salt marsh grasses, salt marsh cordgrass (Spartina alterniflora) and salt marsh hay (S. patens) to look for changes in dominance and of marsh edge to measure erosion, as well as looking for new arrivals to the marsh like the fiddler crab (Uca pugnax).   Through these projects, students get to do hands-on science on issues affecting their own communities, learn the importance of long-term data collection in ecological studies, contribute and communicate their data to ongoing research, conservation, and management programs, and become educated stewards of their local environments. 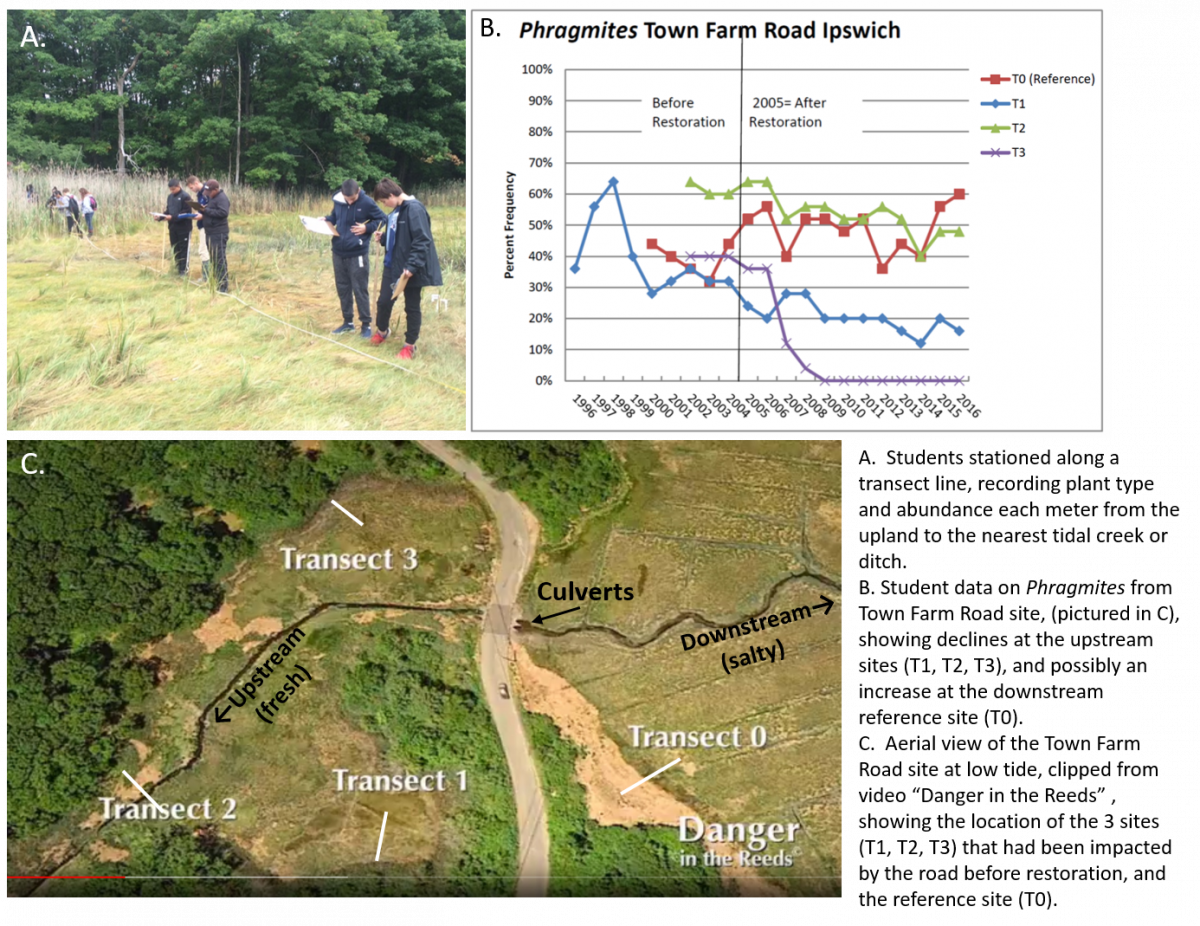