Salt marshes and other coastal wetlands are on the front lines of sea level rise.  Marsh survival, and the protective buffer they provide between the oceans and the uplands, depends on their ability to gain elevation at a rate that at least equals the rate of sea level rise.   For marshes that cannot increase elevation by migrating ‘landward’ to higher ground due to natural or man-made barriers (such as buildings or roads), elevation increase must be accomplished by accumulating sediment and organic matter, a process called “accretion”.  This is the situation for marshes at Plum Island Ecosystems (PIE) LTER site, which are facing rapid sea level rise.

Historically, soils eroded from the uplands and transported downstream by rivers provided a key sediment source for many marshes.  However, PIE scientist Nat Weston found that the damming of many rivers of the East coast for power generation and for mills, including the rivers in the watersheds for PIE, effectively cut off that sediment supply.

Where, then, are marsh sediments coming from?  Weston constructed sediment budgets for tidal creeks of some PIE marshes that show a net sediment import from those creeks to the marsh (unpublished data).  These results suggest a “within the marsh/estuary” source of sediments, and fit with other PIE research, led by Sergio Fagherazzi, mapping erosion and its causes along the marsh edge.  In a counter-intuitive finding, Nicoletta Leonardi found that most of this erosion occurs from average wave conditions, not from violent storms (see: "It's the tortoise, not the hare"). Chuck Hopkison and coauthers have constructed a whole marsh sediment budget showing that marsh edge erosion is a significant sediment source for the marshes, but even so, only accounts for about 30% of mineral sediment required to match sea level rise. Their budget points to the largest source coming from oceanic inputs and erosion of tidal flats, a flux that has not yet received enough attention.  All of these results suggest the marsh is sacrificing area in order to gain elevation (right).

Are PIE marshes gaining elevation, and is it enough to keep up with sea level rise?

One way PIE scientists are measuring the rate of elevation change in these marshes uses sediment elevation tables (SETs; below left).  SETs are located at a number of sites spanning the current range in elevation across the marsh.  At each SET site, a permanent support rod or pole is driven into the marsh as far as possible.  Using high-precision GPS equipment, the location is mapped and its elevation determined relative to established benchmarks.  During measurements, a portable, horizontal arm or plate is attached to the permanent support.   Pins are then lowered through the plate to the marsh surface, and the distance from the plate to the surface is precisely measured.  Our long-term dataset of changes in these measurements provides site-specific accretions rates. 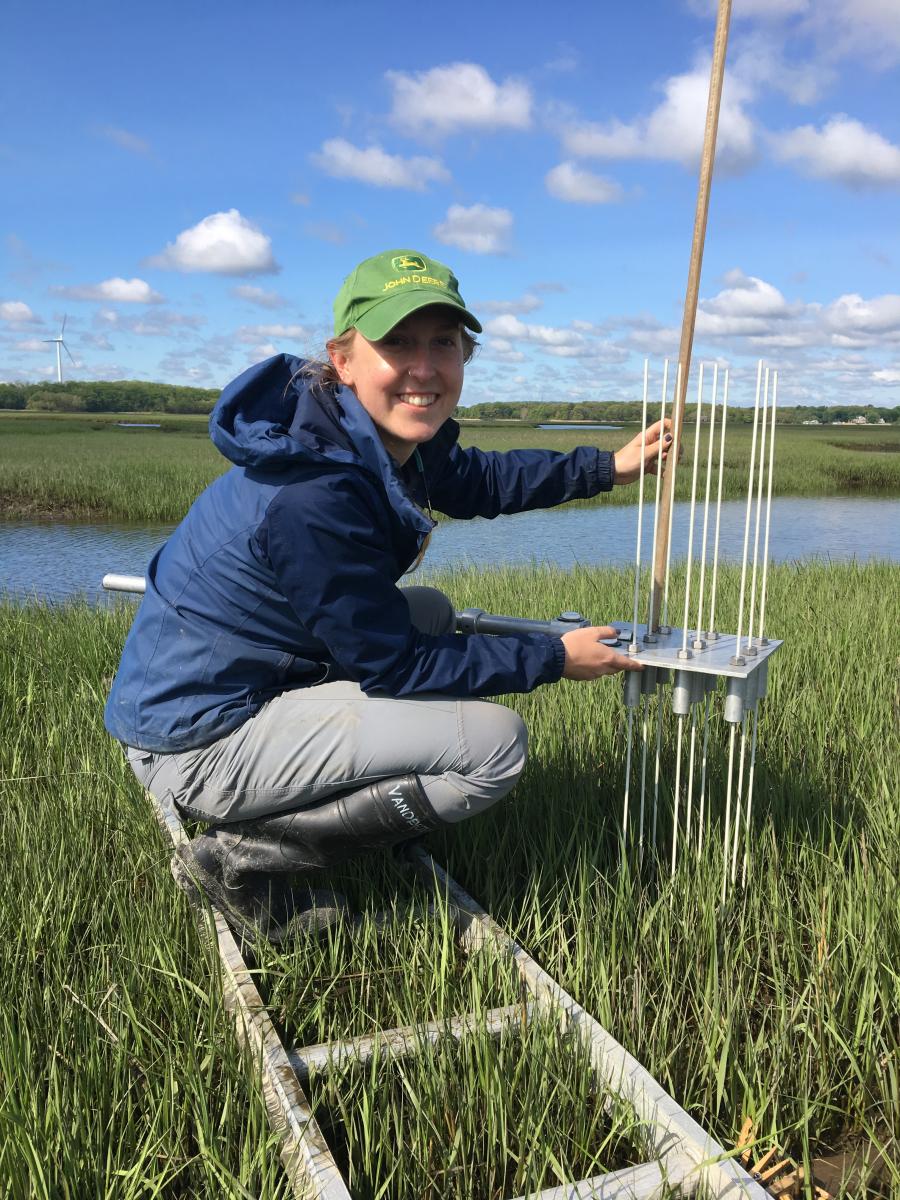 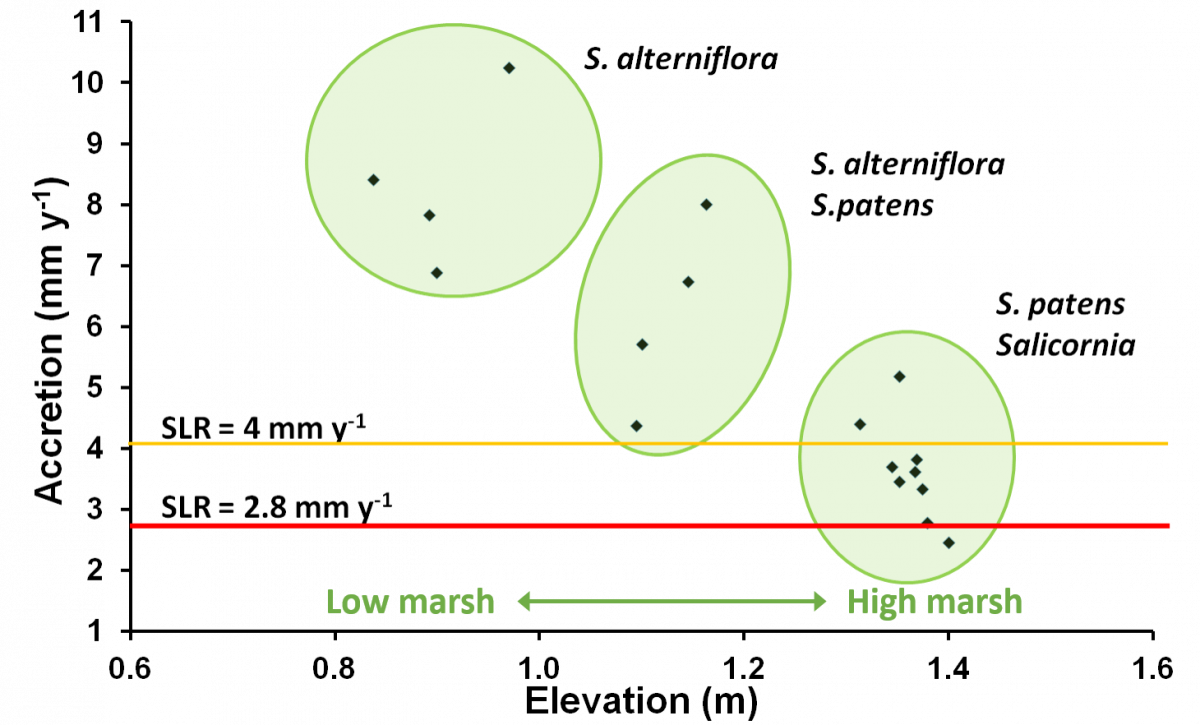 We have found that accretion rates differ with elevation and with vegetation type (above right).   At present, low elevation sites ( ~0.9 m above current mean sea level) dominated by saltmarsh cordgrass (Spartina alterniflora) are accreting at rates ranging from about 6.5-10.5 mm/year.  High elevation sites (~1.35 m above current mean sea level) dominated by salt marsh hay (S. patens) are accreting more slowly at about 2.5 - 5.5 mm/year.  This means that at the historical rate of sea level rise - 2.8 mm/yr - most of the PIE marshes should be able to keep up.  However, sea-level rise has accelerated, and is currently  4mm/yr.  At this or higher rates expected in the future, most high marsh will not be able to accrete fast enough and will drown.  Under this scenario, the surviving marshes will transition to predominantly S. alterniflora low marsh and will shrink in area, sandwiched between wider and deeper creeks and upland geology.  Additional PIE-LTER research will focus on understanding the impact that this change in marsh structure will have on marsh food webs, fish growth, and the ability of marshes to provide storm buffers for coastal communities.