Salt marshes are important sinks for atmospheric carbon dioxide (CO2), but their capacity to store carbon may vary in response to climate change, sea level rise, and coastal development.  It is important to understand what factors determine the amount of carbon stored by marshes each year so that we can better assess their potential for long-term storage.

Led by Inke Forbrich, scientists at PIE are addressing these questions of annual variability using instruments mounted on towers that measure CO2 in the atmosphere over the marsh (right).  Combined with measures of air currents, these instruments monitor the net flux of CO2 into the marsh as it is taken up during plant growth and out of the marsh as dead organic material is respired away (see also "Carbon, carbon everywhere but still a missing sink"). The net annual difference in these measures determines whether the marsh is an overall sink or source for atmospheric CO2 .  When there is more flux “in” than “out”, the marsh is considered a sink, and that difference is a measure of the amount of carbon being stored in the sediments of marshes. 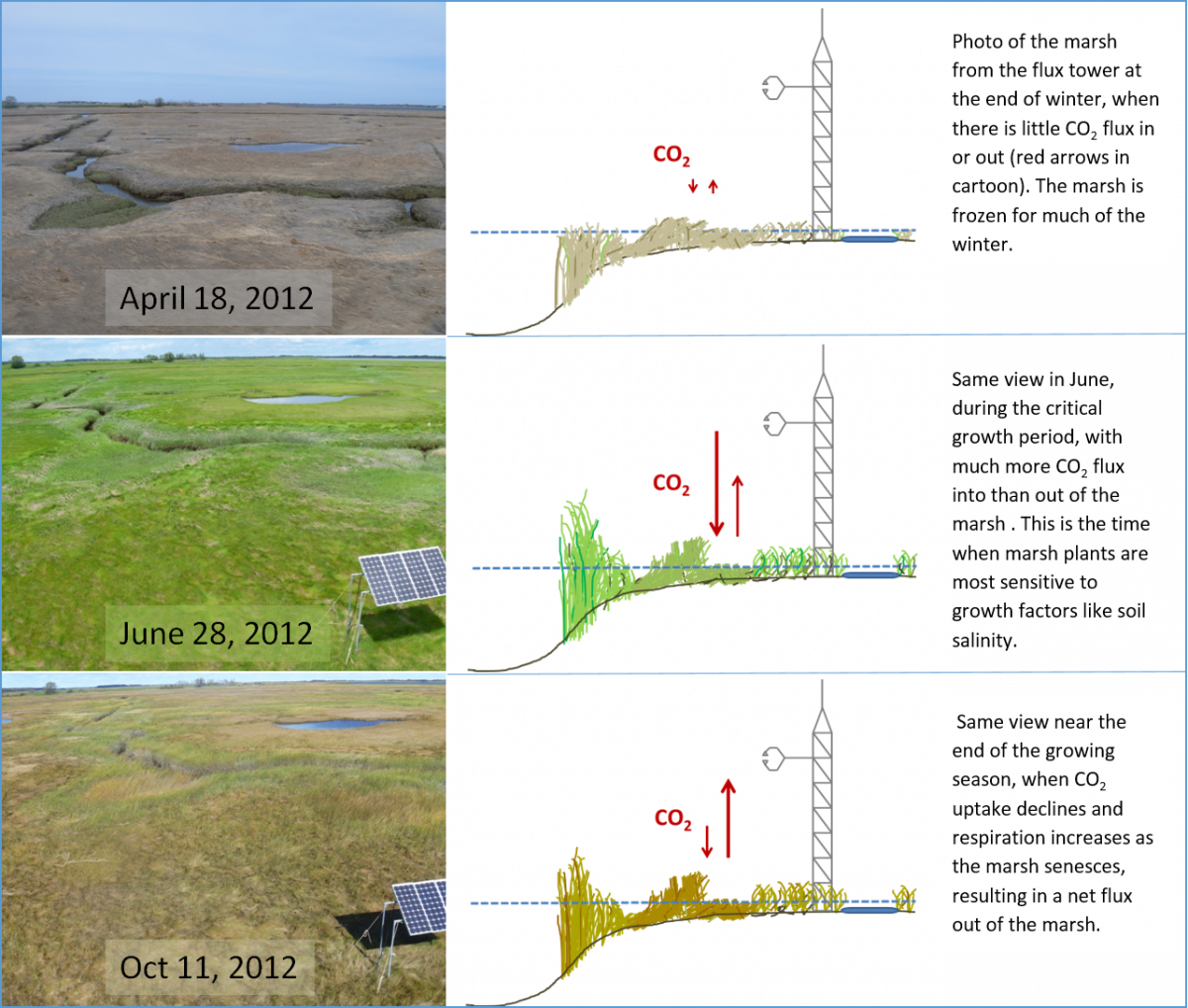 Flux data from 2013-2017 confirmed that the PIE marsh was a strong net carbon sink for all years.  However, the amount of carbon stored each year varied considerably, ranging from 104 to 233 g C/m2/yr (below left).  In addition, there were seasonal differences, with the marshes acting as a substantial net sink during the growing season (June to September), but as a net, although weaker, source of CO2 for the rest of the year. Forbrich found that both seasonal and year-to-year variability stemmed mostly from differences in plant productivity at the start of the growing season (June), which sets the stage for the year’s growth (below right:  NDVI, or Normalized Difference Vegetation Index, is an indicator of plant productivity used in remote sensing; the higher the index, the more leaf area, and therefore the higher capacity for photosynthesis and growth).

Higher productivity appears to coincide with years when June rainfall is considerably higher than average. High rainfall likely lowers soil salinity that can stress even salt marsh plants during this critical growth period.  To verify the effects of rainfall on soil salinity, Forbrich measured soil salinity during the growing seasons of 2016 (a dry year) and 2017 (a wet year) and in fact found reduced salinities in the wet year.  These findings show that environmental factors, such as changing rainfall patterns resulting from climate change, may have important implications for carbon storage by marshes. 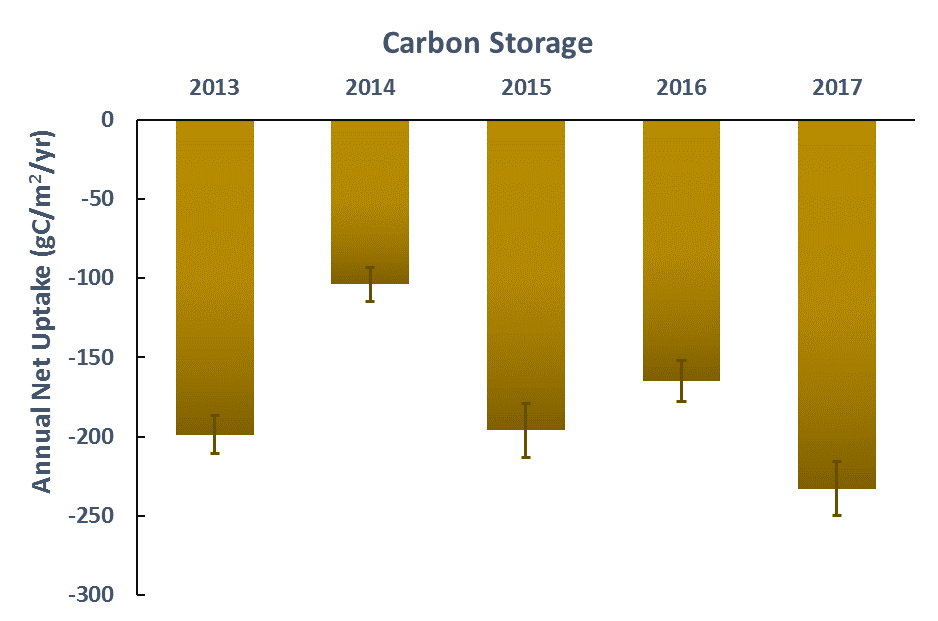 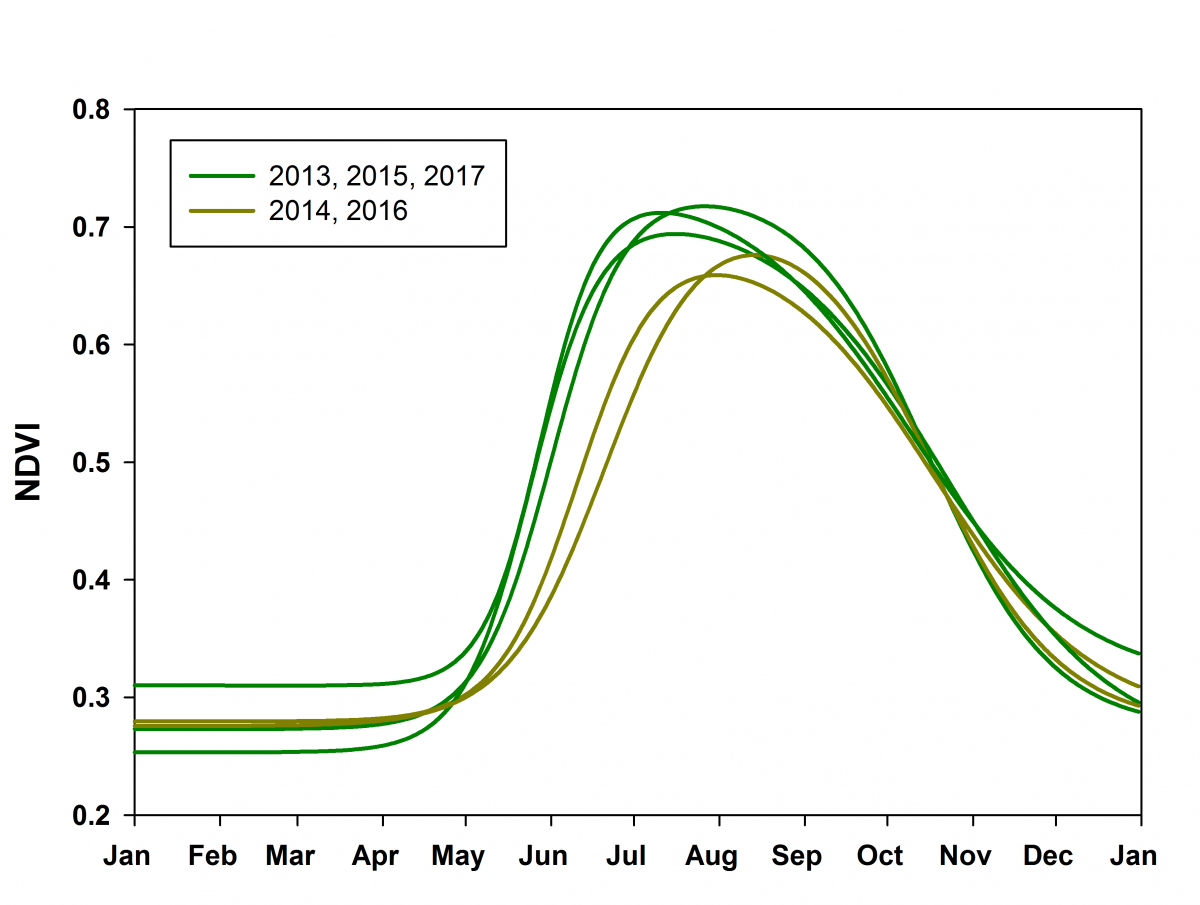