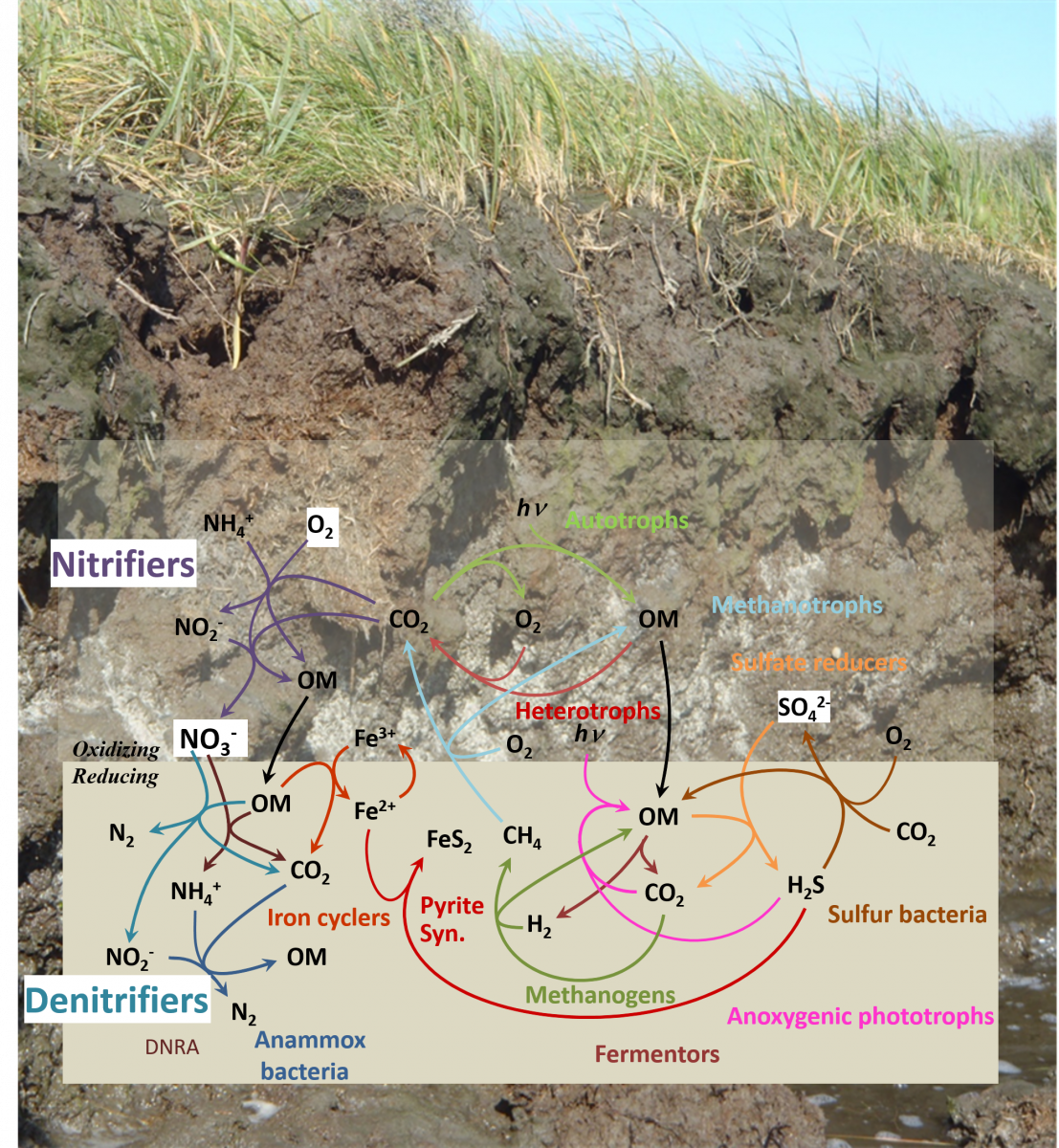 Gardeners and ecologists alike know that nitrogen is a soil nutrient that is necessary for plant growth.  They alsoknow that too much nitrogen, for example over-applied as fertilizer, can lead to problems of eutrophication in nearby water bodies.  However, nitrogen in the form of nitrate has another important role, particularly below the surface in wetland soils where oxygen becomes depleted.  Could added nitrogen have consequences here, too?

Like all organisms, those that live deep in soils or sediments must respire to get energy, and they either take advantage of mechanisms that transport oxygen down to where they are living (for example, plant roots), or they use something in place of oxygen for their respiration. Although there are several possible substrates they can use, including abundant sulfate from seawater, nitrate is the next best, yielding nearly as much energy as oxygen when it is used for respiration.  This energy is derived from the transfer of electrons between compounds, with organic material “donating” electrons as it becomes decomposed and others, like oxygen and nitrate “accepting” those electrons.  Microbes, including fungi, that live in soils and sediments have metabolic pathways (as illustrated at right) that enable them to use nitrate to accept electrons, fueling their role as organic matter decomposers. However, nitrate is normally available to them in only very small amounts and usually only near the surface of the sediments.  In two different experiments, PIE scientists have asked: “What happens to rates of organic matter decomposition when additional nitrate (which might come from runoff or wastewater, for example) is made available to microbes and fungi that live in marsh sediments?”.

Experiment 1: In a laboratory experiment designed to test the potential response of microbes in anoxic (oxygen-free) sediments to increased nitrate availability, Ashley Bulseco-McKim compared decomposition rates in sediments incubated with seawater to sediments incubated with nitrate-enriched seawater (Fig. 1A).   The assumptions were that the very shallow sediments would contain fresher, more easily decomposed organic material and some very small amount of naturally present nitrate. The deeper sediments would contain progressively older material that is much more energetically demanding to use, and no nitrate. Each depth zone may also have started out with different microbial communities.

At the end of the experiment, the total amount of carbon respired (or organic matter decomposed) in the nitrate-enriched sediments was significantly larger than in the untreated sediments at all tested depths (Fig. 1B), and notably the increase was as large in the deeper sediments as in the shallow.  This is important because it shows that with the addition of nitrate the microbes were able to use a carbon source they normally would not have the energy to break down.   Analysis of the microbial communities showed that a shift in community composition occurred; taxa that can use nitrate became more abundant in the nitrate-enriched sediments when compared to seawater.  This shift also led to a decrease in community diversity, as taxa most able to take advantage of a high nitrate environment outcompeted other groups (Fig. 1C). 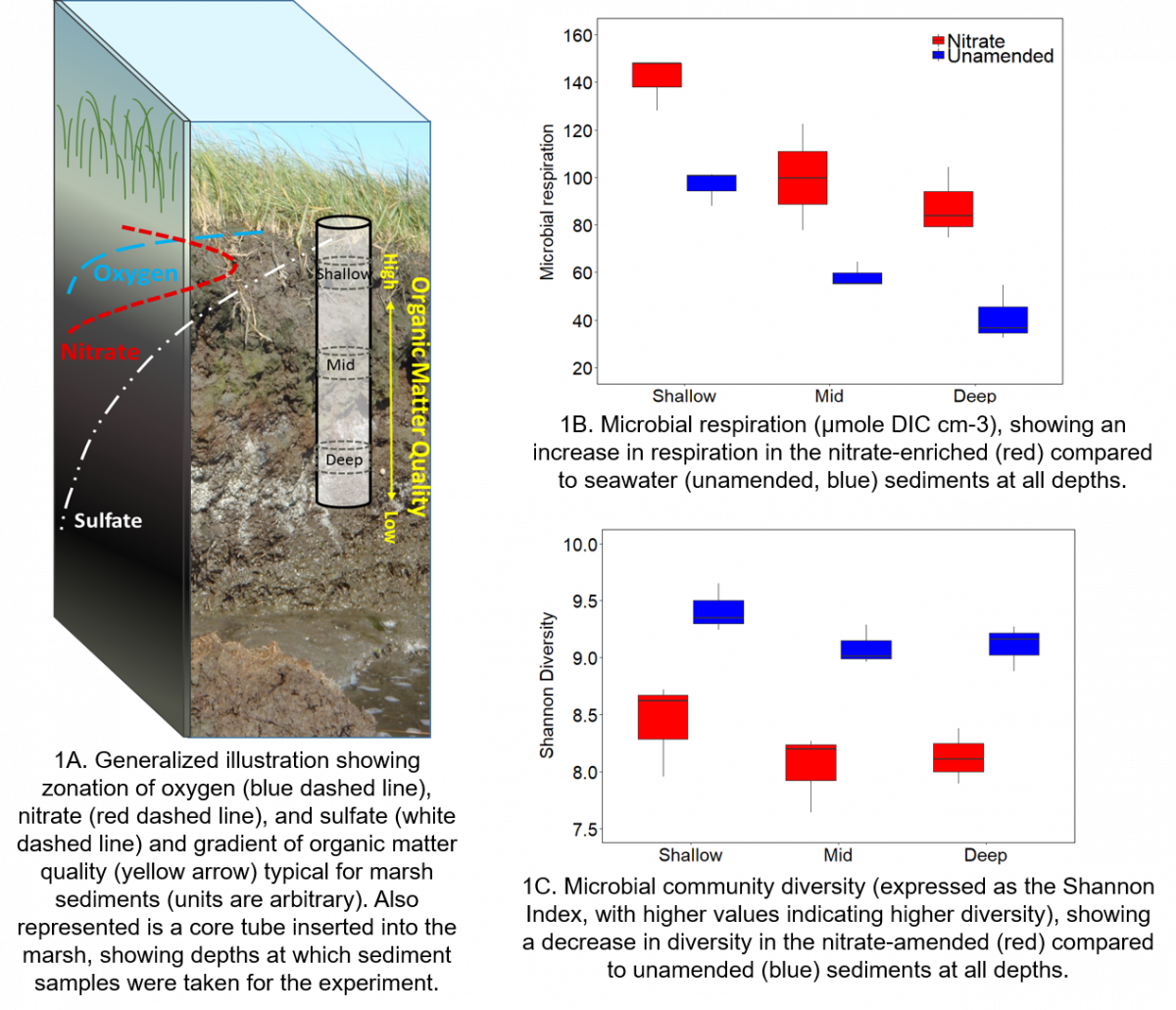 Experiment 2:  Taking advantage of a long-term fertilization experiment in the marsh, Patrick Kearns led a related study to look at the effects of nitrate addition on a less-studied community of marsh decomposers—the fungi.  Kearns and his colleagues took samples from four different habitats at two pairs of marsh creeks (Fig. 2A), one pair that had been experimentally fertilized by adding nitrate to inflowing tidal water, and the other that had received no fertilization.  Their analyses showed that community composition of the fungi differed among the four habitats (mudflats, tall Spartina alterniflora, S. patens, and short S. alterniflora). Under fertilization, community composition in all habitats shifted, with the greatest effect in the habitats with most direct exposure to the added nitrate (mud flats and tall S. alternifora along the creek banks).  Fungal abundance increased, and in contrast to the microbial response noted above, diversity in the fungal community increased with fertilization (Fig. 2B).  These shifts were largely driven by an increase in fungal taxa that are also thought to be able to use the excess nitrate as an electron acceptor under anoxic conditions. 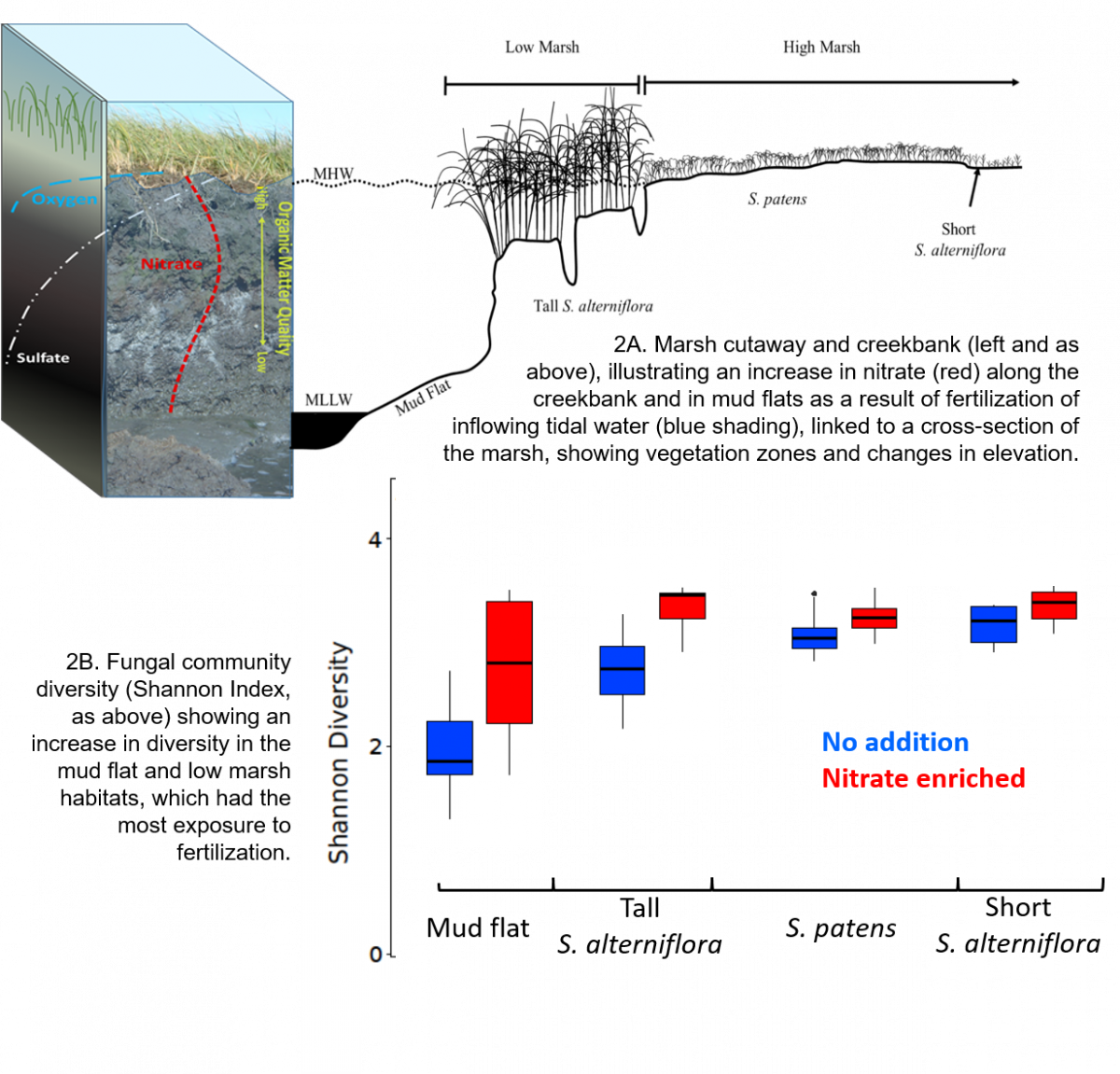 Both of these experiments showed that the addition of nitrate changed the community composition of microbial decomposers in marsh sediments, stimulating taxa that were best able to take advantage of the new energy resource.   The first experiment also directly measured the resulting change in function, and demonstrated that the addition of nitrate as an electron acceptor facilitated the decomposition of buried carbon that is normally considered resistant to breakdown by microbes.  These results have important implications for the role of marshes as long-term carbon sinks: if decomposition increases in the face of increasing nutrient inputs to the coastal zone, carbon once stored in marsh soils may be released back into the atmosphere.