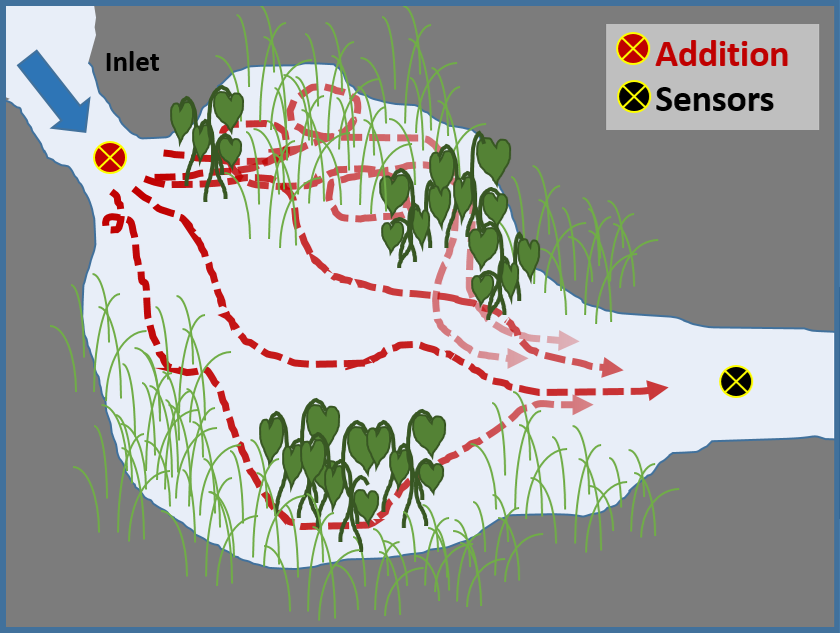 nitrogen as the Boston metropolitan area spreads and forested land is converted to residential, commercial, or industrial use.  Even so, researchers led by Wil Wollheim have found that much less of this nitrogen gets transported downstream to the estuary than expected. They attribute this removal of nitrogen to key processes that occur in the network of rivers, streams, and associated wetlands of the watershed.

A good deal of research exists on nitrogen removal by streams and rivers in this network and others, but directly quantifying the role of fluvial wetlands (e.g. floodplains, backwaters, mill ponds, and beaver ponds) is difficult.   For streams and rivers with well-defined channels, determining the ability of wetlands to remove nitrogen often involves adding some additional nitrate along with a non-reactive dye or salt that tracks water flow. In fluvial wetlands, timing this kind of sampling is difficult due to flow patterns that are more variable than in channelized streams and large water volumes that dilute the tracer; for example, uneven numbers of samples may be collected as concentrations increase or decrease, or the peak may be missed.  In a new approach, Chris Whitney addressed this problem by using recently available sensors that monitor nitrate and a tracer salt, sodium bromide, within the flowing water and continuously for the duration of an experiment. In this way, Whitney was able to adapt the stream methods for use in three fluvial wetlands in the PIE watersheds.

The three wetlands differed in their surrounding land-use patterns and nitrogen inputs. They also differed in how well connected they were to their associated stream, which has implications for water flow and nitrogen delivery. One wetland was periodically connected to its associated stream, one was permanently flooded, and one was an active beaver pond with a dam near its outlet.  The combination of features (discharge, width and depth, damming, baffling by vegetation) that influenced how water flowed through each wetland and how long it stayed within the wetland, determined the rate that nitrogen was removed from the water. The longer a water parcel stayed within the wetland, the more chance it had to come in contact with bottom sediments and vegetation where biological uptake of nitrogen could occur. 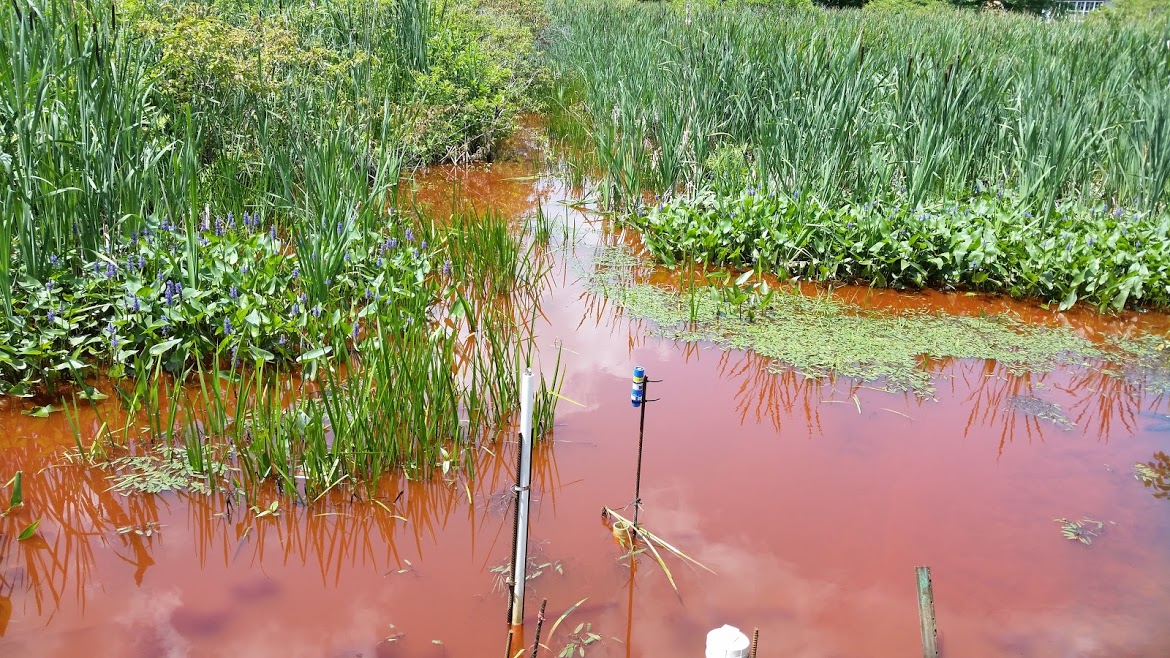 removal varied in each wetland depending on season, and was generally higher in the fall when stream flow is lower than in spring.   Because of this variability, there was no statistically significant difference between the wetlands; however, removal (as a percent of input) was highest in the wetland that was only periodically connected to its stream when it held its water longer than the other wetlands.   Importantly, nitrogen removal in all these fluvial wetlands was greater than had been measured in the streams and rivers of the river network. With these new measurements, the effect of the fluvial wetlands can now be incorporated explicitly into models for nitrogen removal by the river network.

There are two opposing processes occurring in these watersheds that could affect the fate of wetlands.  Beaver populations are on the rise, and increasing numbers of beaver ponds will add fluvial wetlands. At the same time, some human-built dams are being removed to restore fish movements and habitat, which will result in the loss of wetlands behind them.  In the face of increasing nutrient inputs to these systems, managers must consider the important role fluvial wetlands play in reducing the transport of those nutrients downstream, ultimately to sensitive coastal estuaries. 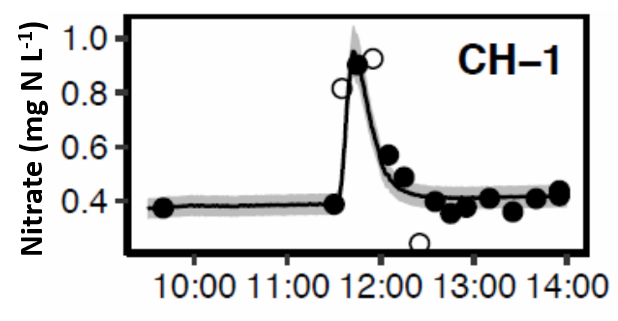 Top: Cartoon illustrating position of addition at inlet of wetland, the variable paths taken by water (carrying the addition) through the wetland, with staggered arrival and variable concentration (depending on the flow path) of the addition at the sensors, placed at the outlet

Middle: View of the CH wetland outlet during an experiment when a dye was used to track the addition; sensor and other instruments are in the foreground (submerged).

Bottom: Data from the permanently inundated wetland (CH) showing the time course of the nitrate addition as it passes the sensor location as measured by the sensor (solid line) compared to discrete grab samples (circles). Note the complete record provided by the sensor.