PIE scientists have been leaders in using anadromous fish movements to inform watershed restoration efforts. Our research on river herring, a declining fish in Massachusetts, is providing new insights into fish ecology as indicators of watershed status, in linking freshwater dynamics to estuarine ecosystem function, and informing watershed restoration. 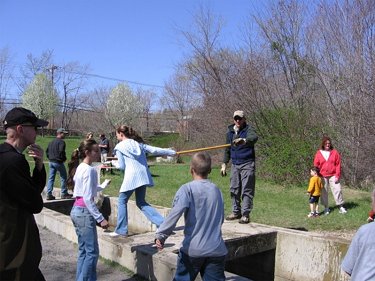 There is a growing understanding of the need to restore coastal ecosystems to support both natural and human populations. In a degraded, developed watershed, setting realistic goals for restoration is challenging because the human footprint has substantially altered the historic biological and physical characteristics. The maintenance of a resilient population of anadromous fish, i.e., fish that move between the ocean, estuarine and freshwater ecosystems to complete their life cycles, can be a practical and socially important benchmark for coastal ecosystem restoration. Anadromous fish have iconic status in many coastal communities fish. They require connectivity across multiple, historically intact habitats in order to thrive and are particularly vulnerable to detrimental urbanizing human impacts in freshwater and estuarine ecosystems, such as water pollution, water withdrawal, in-stream habitat modification, and fragmentation via dams. Thus, anadromous fish can act as indicators that favorable condidtions exist on a wide scale when their populations are growing or as sentinels of adverse anthropogenic change when populations decline. And because the restoration of anadromous fish attracts interest of the coastal community river herring can serve as a focus for watershed restoration activities (photo right of citizen scientists at a fish ladder; photo Holly Frank).

One group of anadromous fish, river herring (alewife and blueback herring), plays a vital role in the function of estuarine ecosystems. By recycling nutrients through feeding and excreting, they can affect ecosystem productivity. As migratory species that are consumed by a variety of piscine, avian, and mammalian predators, they are a key link in food webs. When they return to spawn, spawning adults use the same within river pools and side channels that function to remove nutrients in a stream. Thus, a successful spawning population is also indicative of a stream that also serves to increase water quality by removing nutrients. As multi-scale, multi-discipline indicators of ecosystem function, river herring can guide restoration planning of degraded coastal watersheds.

Restoration of these fish and using them as effective ecosystem indicators require knowledge of spatially explicit habitat use and movements within freshwater. By radiotracking both native and transplanted alewives in the Ipswich River (above), we found evidence that river herring have a more sophisticated 'sense of place' than previously suspected. Both groups of alewives spent most of their time in the pool habitats where they were released, however, native fish remained in the river system much longer than transplanted fish. This suggests that river herring are looking for specific biophysical aspects of rivers, most likely learned from their previous experience in their native river, for spawning and rearing of young. River and fish restoration will require an understanding of the behavior and expectations of fish. Consequently, a more sophisticated fish and watershed restoration strategy is required than simply transferring spawning fish among river systems, the traditional method used by management agencies. More careful consideration must be given to matching the appropriate configuration of within river habitats, hydrological conditions, zooplankton production, and predator-free refuges to the choice of source populations. Our river herring research is an innovative integration of organismal behavior, riverscape ecology, and human dimensions that provides important insights into viable approaches for coastal ecosystem restoration.