PIE-LTER research is focused in the estuary and watersheds of Plum Island Sound in northeastern Massachusetts. The Ipswich and Parker River watersheds have a combined drainage basin size of 609 km2 and lie entirely within the Seaboard Lowland section of the New England physiographic province. Shallow soils, glacial till and bedrock outcrops are dominant geological features formed during the last ice age. Geology of the basin is primarily igneous and metasedimentary Paleozoic and Precambrian bedrock with surficial deposits of till, gravel and sand. Wetlands underlaid by glaciofluvial deposits are the largest natural water storage areas of the basin. The basin has a northern temperate climate with 1180 mm of precipitation evenly distributed throughout the year. Air temperature fluctuates annually between an average winter minimum of -7ºC and an average summer maximum of about 28ºC.  The average growing season is 180 days between mid-April and mid-October.  River flow is greatest during early spring snowmelt and low in the summer and fall when evapotranspiration and municipal water withdrawals exceed rainfall.  Because diversion of river water for sewage and municipal water needs exceeds river flow in summer (>20% of annual flow), mid reaches of the river often dry up. The Ipswich River has been designated one of the 10 most threatened rivers in the country (AmericanRivers, 2003). 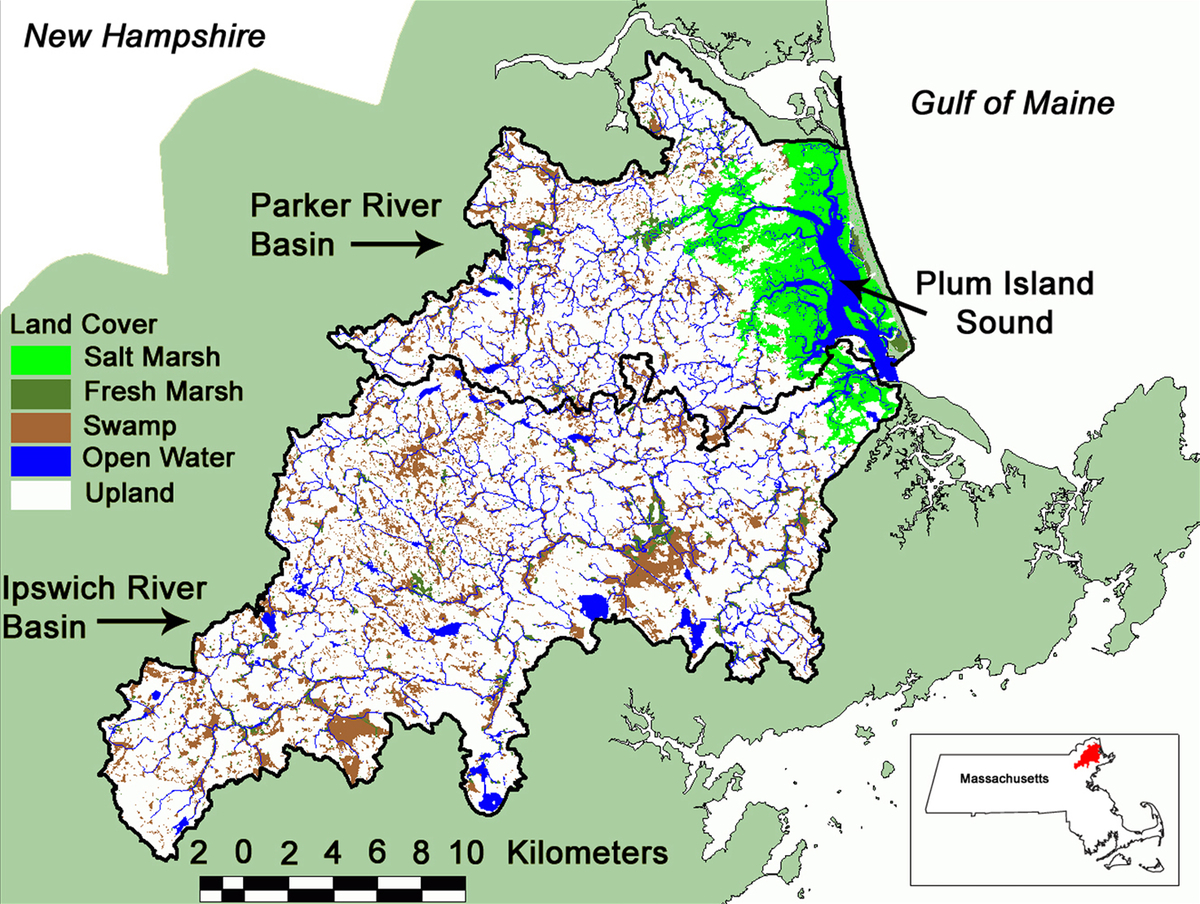 Local land use has changed substantially since European colonization. Human population has increased dramatically over the past 50 years, and was estimated at about 470,000 in 2000 (328 people/km,  U.S.Census, 2006). In the past two decades, land-use change has been more widespread in the Boston area  (433,000 acres) than any other Metropolitan Statistical Area (MSA) in the country except Atlanta. This growth in land area has been accompanied by one of the smallest increases in population (12%). As a result, the Boston MSA, which includes our study area, has become one of the most “sprawling” areas in the country. This development pattern is being driven by persistently high home prices, which are driving low- and middle-income residents to outlying areas; by high-income residents who are developing coastal areas for seasonal recreational use; and by a fragmented decision-making landscape where the land-use decisions in one town directly affect the development pressures and outcomes in neighboring towns.

Massachusetts is a “home-rule” state, which means that vesting decision-making authority at the local (town) level is emphasized over the county or state levels. Across the 26 towns that make up the Plum Island watersheds, this fragmented decision-making leads to difficulties with integrating land-use, water supply, and ecological planning needs. In addition, there are other stakeholders with interests in and varying levels of authority over the Plum Island watersheds that further complicate planning. Examples include quasi-independent regional governing bodies such as the Massachusetts Water Resources Authority (MWRA). Overall, a splintered decision-making atmosphere would seem to complicate the chances of establishing effective coordinated land and/or resource (e.g., water) management efforts, but the ultimate direction of this effect and its consequences for the natural system remains an empirical question.

The Plum Island Sound Estuary is a coastal plain, bar-built estuary with extensive areas of productive, tidal marshes: the largest expanse of intertidal marsh in the Northeast. Tides are semi-diurnal with an average tidal range of 2.9 m and an spring-neap range of 2.6 to 3.6 m. Marshes flood only during spring tides. Estimated tidal prism is about 32 Mm3. Mean depth increases along the length of the estuary from about 1.4 m at the head of the estuary to about 5.7 m 11 km downstream at the head of the sound. Depths then decrease through the broad shallow sound to about 1.8 m prior to increasing to about 4.7 m at the mouth of the estuary. The large tides combined with the shallow depths and low freshwater inputs results in a vertically well mixed estuary with type 1A circulation. Water body area ranges from 5.6 to 12.8 km2 from low to high tide. There are extensive areas of non-vegetated, intertidal flats at low tide (7.2 km2). In this estuary where the typical spacing of topographic features is considerably less than the tidal excursion and tidal amplitude is of the same order as average depth, tidal shear dispersion is probably the primary mechanism contributing to mixing. Annual water temperature range is from -1.0 to 28ºC and salinity range is from 0 to 32.

Salinity distributions in Plum Island Sound modeled from freshwater discharge measurements. 1987 was an unusually dry summer, as can be seen from the high salinities in the upper Parker River Estuary.

Vegetation is typical of New England marshes, the major wetland species being Spartina alterniflora and S. patens in brackish and saline regions and Typha, Scirpus and Carex in fresh water regions. Of the total estuarine area of 59.8 km2, 39.8 km2 is occupied by fresh- or saltwater marsh. Overall water quality and fisheries production (recreational and commercial – especially shellfish) is high, but the estuary is beginning to show signs of eutrophication in its upper reaches. The estuary has been a source of economic productivity for more than 200 years. In the late 1700s, approximately 1,000 barrels of clams were harvested each year in the town of Ipswich. Clam harvests have declined in recent decades, though requests for new commercial and recreational licenses number several hundred per year ; these economic activities are valued at several million dollars per week.

Marine biologists have long realized the presence of distinct regional distributions of the coastal flora and fauna. On the basis of diversity and general faunal and floral distributions, 9 geographic provinces have been described for coastal waters of North America. The provinces are generally related to the 4 climatic regions of the Atlantic and Pacific Oceans: arctic, cold-temperate, warm-temperate and tropical. Coastal and land-margin LTERs are situated in 5 of these 9 provinces.

While the watersheds of the Plum Island Ecosystems LTER site are experiencing rapid change in population, economic activity and land use, wetlands both in the watershed and the estuary are well protected by state and federal regulations. Approximately 25% of the Ipswich River watershed has been set aside as conservation land. In addition, most of the estuarine ecosystem is included in the Parker River National Wildlife Refuge. Thus the integrity of the system is high and will serve as a valuable laboratory well into the next millennium.