Scientists working at PIE and 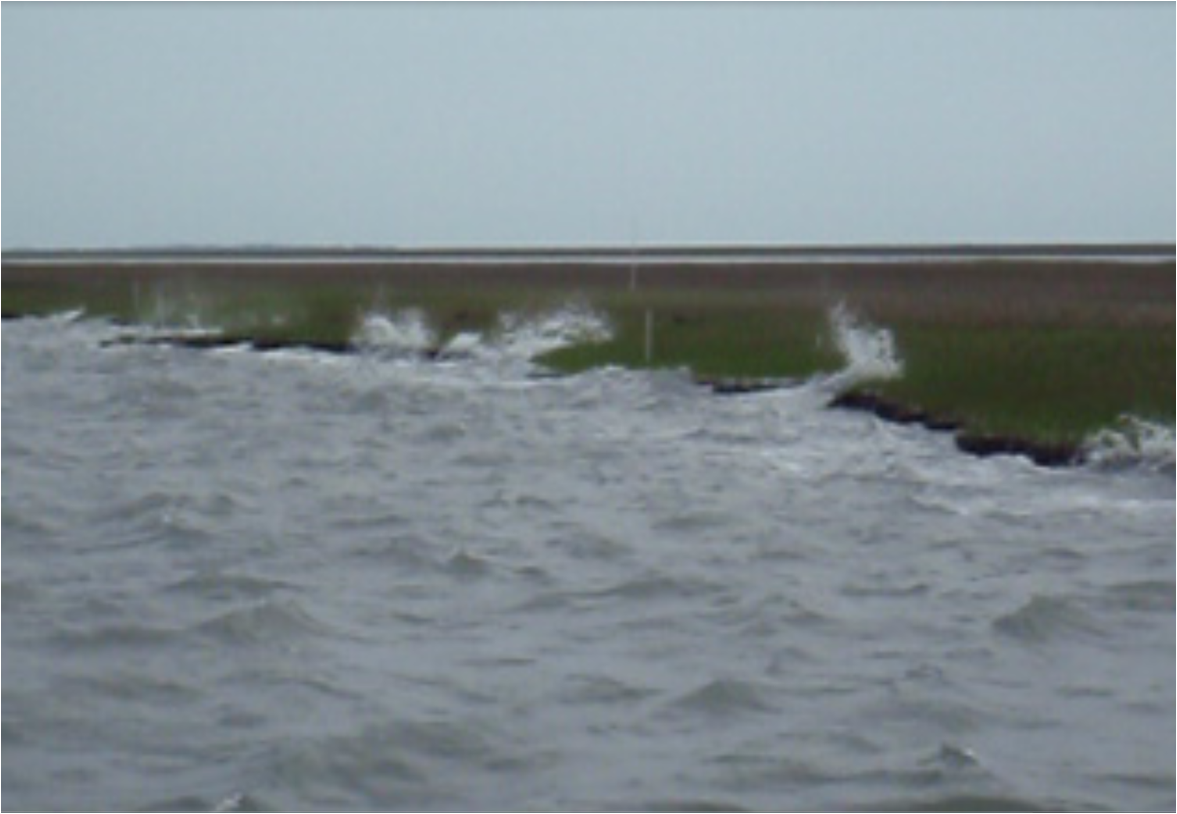 around the world have found it is not the rare, extreme events that cause the most erosion in salt marshes; rather, it is the slow and steady forces of waves driven by moderate and frequent wind conditions.  This is an important finding because we need to understand the role extreme storms play in salt marsh losses that have been documented worldwide and because salt marshes are being proposed as natural buffers against violent coastal storms.

Based on a large dataset of lateral erosion rates in salt marshes, the scientists determined the general response of salt marsh boundaries to wave action under normal and extreme weather conditions.  They found that as wave energy increases, the response in erosion rate remains linear; that is, salt marsh erosion occurs continuously along the entire range of wave energies.  Two important observations arise from these results:  1.) There is no wave energy level below which no erosion is expected, underlining the importance of relatively low wave energy conditions for salt marsh lateral retreat; 2.) As wave energy increases, salt marshes do not respond with a catastrophic collapse (e.g., absence of exponential growth in erosion rates), highlighting the intrinsic endurance of salt marshes against extreme events.

The highest contribution to total marsh edge erosion comes from moderate but frequent weather conditions. Frequency is the key here, because it is the product of frequency and the magnitude of erosion that determines the overall erosion (geomorphic work = erosion magnitude x frequency).   Thus, we found that it was low wave energy events (wind speed ranging from 10 to 40 km/h; blue colors in the pie chart) occurring every 2 to 3 months that contributed most to marsh edge erosion, whereas violent storms and hurricanes (wind speed above 65 km/h), occurring on decadal timescales, contribute less than 1%.  Detailed field measurements taken before and after Hurricane Sandy at PIE sites agreed with these findings, showing negligible erosion along most of the marsh shoreline, and an erosion rate less than the average annual rate of 0.35m/yr.

The intrinsic resistance of salt marshes to violent storms and their predictable erosion rates during moderate events should be taken into account by coastal managers in restoration projects and risk management plans, and suggest these landforms are well-suited for ecosystem-based coastal defense.