Many studys have been conducted in the Plum Island estuary and associated watersheds producing genomic sequence information for microbial populations. Upon publication of manuscripts the sequence data becomes available through GenBank repositories by referencing the published "Accession Numbers". Often times researchers also need additional environmental information/data about conditions during or leading up to the microbial sampling. The associated environmental data is considered metadata for the microbial sequences. PIE researchers are working on providing the associated environmental data for the genomic data, with the goal of providing minimum information about a marker gene sequence (MIMARKS), a standard developed by the Genomics Standards Consortium (GSC). 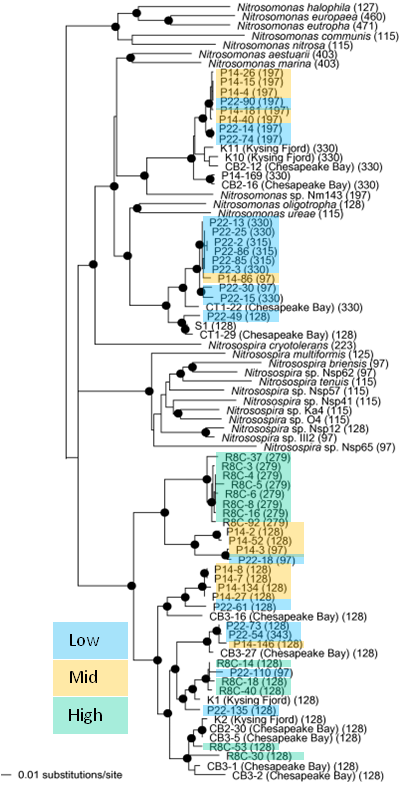 Effects of Salinity on Ammonium Oxidizers

The relationship between ammonia-oxidizing bacteria (AOB) and potential nitrification rates was examined in sediments from three sites along a salinity gradient in Plum Island Sound estuaries.  Over the three years of the study,  both AOB abundance and potential rates were significantly higher in spring, when river discharge lowers salinity,  than in late summer.  Ammonia oxidation kinetics were site-specific and related to AOB community structure.  Although salinity appeared to be an important factor in determining AOB distribution, it may not be the primary factor as AOB exhibited a broad range of salinity tolerance in our experiments.  Experiments showed that all sites had highest rates under conditions of intermediate salinities.  However,  rates became inhibited when sediments were  incubated under salinities too different from their ambient conditions.  For more, see Bernhard et al. 2005, 2007, 2010.

Functional redundancy in bacterial communities is expected to allow microbial assemblages to survive perturbation by providing continuity in function despite compositional changes in communities. PIE scientists and collaborators examined microbial community response to perturbation caused by nutrient enrichment in salt marsh sediments at PIE and the Great Sippewissett Marsh (GSM).  Results from  deep pyrosequencing of 16S rRNA and functional gene microarrays targeting genes for denitrification (nirS) showed very little difference in the composition of the microbial community, despite significant variations in external nutrient supply and demonstrable changes in other aspects of marsh ecology. The lack of response to external forcing suggested that sediment microbial community composition maybe resilient to some forms of perturbation.However, recent evident suggests that microbial communities change both composition and function as a result of disturbance, but that the huge numbers and diversity of genes present may mask changes perceivable by some techniques, if the changes occur in lower abundance organisms. PIE scientists are now exploring new techniques such as looking at ratios of RNA (activity) to DNA (presence) to try to tease out the “signal from the noise”, that is, to identify what may be the active minority in the microbial community.   For more, see Bowen et al., 2009, 2011. 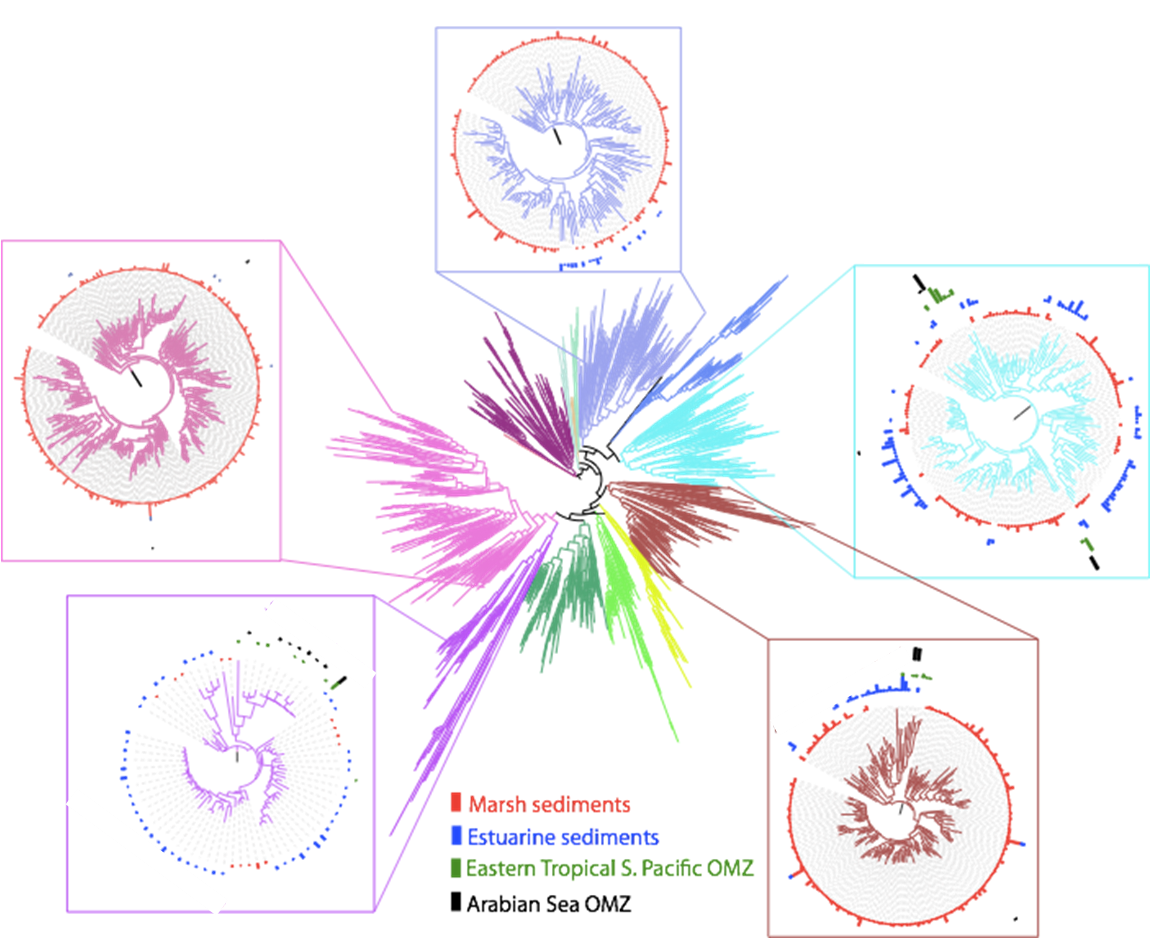 Phylogenetic tree of nirS genes (center) showing  genes from marsh and estuarine sediments (red and blue bars around perimenter of each blowup) widely represented across the diverstiy of the entire tree.

PIE supported the Plum Island Microbial Observatory (PIMO) which identified prokaryotes in salt marsh sediments and plankton and determined their role in controlling major ecosystem processes.  PIMO was closely linked to the PIE LTER project. LTER research addressed how changing inorganic nutrient supply and the quality and quantity of organic matter interact to affect estuarine trophic structure. The Microbial Observatory used LTER data to place microbial communities into the larger context of their physical and chemical environment. In turn, the LTER research gained detailed knowledge about the microbial communities underlying the processes and control parameters which it studied.
In the salt marsh sediments, nitrogen and sulfur cycles influence all of the salt marsh biogeochemical cycles while sulfate reduction dominates decomposition. The Observatory Project focused on the microbes involved with the nitrogen and sulfur cycle with special attention to nitrification and sulfate reduction. This focus was possible because principal investigators brought a suite of tools for culturing, molecular detection, and identification of nitrifying and sulfate reducing bacteria. See Plum Island Microbial Observatory web site for more info.