PIE scientists, together with colleagues at the MBL’s Ecosystems 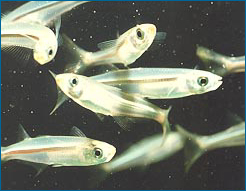 Center, pioneered the use of natural abundance and tracer-level stable isotope studies to construct food webs to examine energy transfer among habitats.  At PIE, early efforts using these techniques examined the food webs in the Parker - Rowley River estuary under the Land Margin Ecosystems Research (LMER) program.  Stable isotope analysis of biota collected in the upper, mid, and lower estuary confirmed that consumers tend to use food resources from the area where they reside. However, an unexpected finding was the shift in isotopic values in mobile estuarine species (Atlantic silversides, blueback herring, and winter flounder) to reflect an oligohaline production signal, evidence these species move to the upper estuary as juveniles in spring and feed and grow there for the summer.   More info…. Deegan and Garitt 1997

Differences in food web structure that are dependent on local hydrology have been revealed with stable isotope tracer experiments, designed to follow the flow of nitrogen through the estuarine ecosystem.  A detailed examination of the food web in the oligohaline reach of the Parker River estuary was conducted under summer, low flow conditions, when water residence time is long enough to allow phytoplankton blooms. The results revealed the importance of a planktonic diatom, Actinocyclus normanii, at the base of this food web, showing that nearly 100% of the introduced nitrogen tracer (15NO3) was processed through this primary producer. A similar experiment in the Rowley River had a different result. The Rowley River receives far less freshwater input than the Parker River and has much shorter residence times. In thie Rowley River, much of the tracer nitrogen was exported by tidal flushing, and very little could be accounted for in the phytoplankton, which were also transported downstream into the lower portion of Plum island Sound. Of the nitrogen that was processed within the estuary, about 30% of the added tracer went through the benthic component. About half was lost from the system by conversion to N2 gas through denitrification.  The 15% that remained for incorporation into the food web was processed through benthic primary producers, primarily the diatoms Navicula sp. and Nitzschia sp., and the filamentous green alga Rhizolclonium sp.. 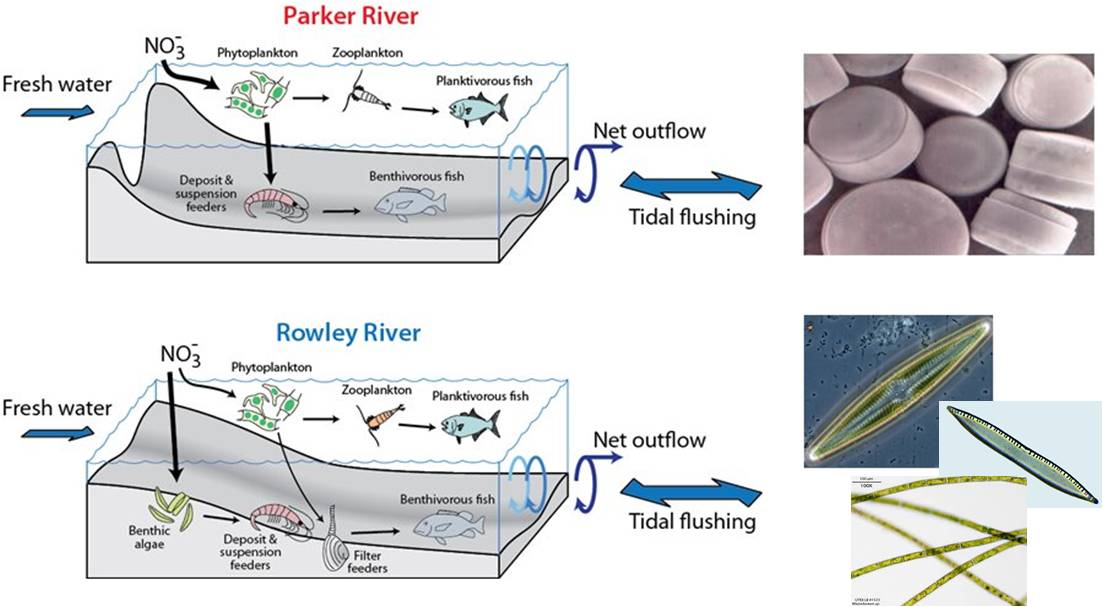 As part of a decade-long nutrient enrichment experiment (see TIDE Project), we 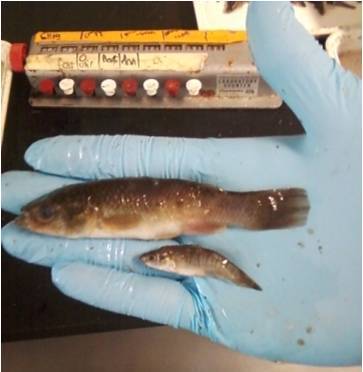 observed significant responses of mummichog (Fundulus heteroclitus) production to nutrient additions in our treatment creeks.  For the first 6 years of fertilization, the ratio of fish biomass in the fertilized creek to the control showed about a 400% increase in the fertilized creeks.  This result was characteristic of bottom-up stimulation of the food web, and was expected given observed increases in other components of the saltmarsh food web such as the production of benthic algae, epibenthic invertebrates, and high marsh invertebrates. However, in the last four years of the experiment, mummichog biomass decreased to levels slightly lower than pre-fertilization.  That is, the pattern predicted by bottom up stimulation was not followed, despite continued stimulation of primary production and benthic invertebrate production. We are currently uncertain about the mechanism by which this apparent tipping point was reached, but we hypothesize that indirect interactions with other species play a key role.

Food Webs in a Hayed Marsh

The foodweb on the marsh, like the marsh itself, is part aquatic and part 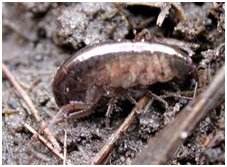 terrestrial. The important primary producers are rooted, vascular plants, Spartina alterniflora and S. patens, with other grasses, forbs and sedges mixed in.  Many of the primary consumers on the marsh are invertebrate herbivores, while others, such as, Orchestia grillus, the most abundant taxa on the marsh, are detritivores, dependent on the litter produced by the marsh plants.  Many of these herbivores and detritivores  become prey for fish at  high tide, when flooding water provides access to the marsh surface.  At low tide, they are fed upon by birds and small mammals. The marshes at Plum Island are unique as one of the last marshes to be used for harvesting saltmarsh hay.  We have examined the 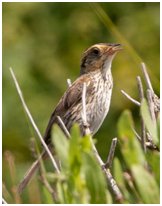 effect of periodic mowing and removal of marsh grass on marsh foodwebs.  We found that haying temporarily alleviates light limitation for benthic algae growing on the surface of the marsh, and several invertebrates as well as young-of-year mummichog shift their feeding behavior to take advantage of the new production.  Feeding activity by birds also increases on a recently mowed marsh platform, presumably because their prey are exposed.  These habitats are important for the saltmarsh sparrow (Ammodramus caudacutus), an obligate saltmarsh species that is considered vulnerable to sea level rise, and counts of breeding populations show some evidence of higher number of birds present in the hayed marshes.   More info Buchsbaum et al 2009

In the watershed, human changes to hydrology and nutrient

inputs may have a number of impacts on stream foodwebs.  Access to habitat by anadramous fish such as blueback herring and alewife may be blocked by dams and culverts, as well as  by water withdrawals which can severely lower stream levels.   We have seen that changes in nutrient inputs can alter the quality of some food resources at the base of the food web, and that some invertebrate taxa, such as caddisfly larvae, (Chironomidae; Ceraclea spp.), gammarid amphipods, leeches and crane fly larvae (Tipulidae) are more abundant in nitrogen-enriched streams.  More info….Morse et al 2012!  Photos herring and Chironomid