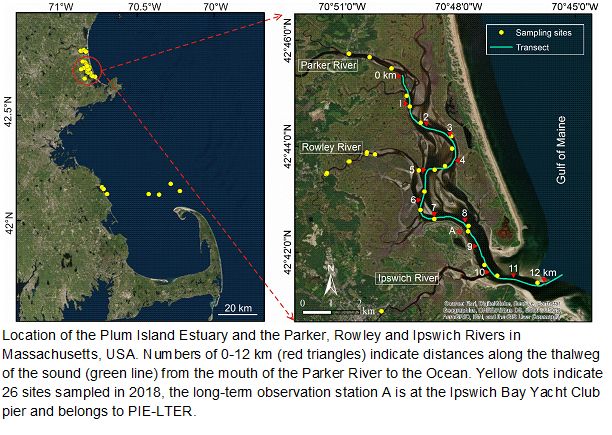 Suspended Sediment Concentration (SSC): Surface water samples (0.5 m depth) were collected using a 4-L horizontal Van Dorn sampler. The entire sample was drained in a 4-L amber high-density-polypropylene (HDPE) bottle and kept on ice in a cooler or at 4oC until analysis, usually within a few hours of sampling. Samples were analyzed for suspended sediment concentration in the laboratory following the protocol of Neukermans et al. (2012). A volume ranging 0.5 L to 2 L of sample water (depending on in situ measured turbidity) was filtered on pre-cleaned and pre-weighed GF/F glass microfiber filters with a pore size of 0.7 µm, rinsed with at least 250-mL of high-purity water (Milli-Q), and dried at 75oC for 24 h. Weights of the filter were measured using a Sartorius Cubis MSE3.6P000DM Microbalance.

Turbidity: A YSI ProDSS Multiparameter Water Quality Meter with sensors for temperature, conductivity, depth, dissolved oxygen, chlorophyll-a fluorescence, and turbidity (infrared detector, 90o, Formazin Nephelometric Unit (FNU)) was deployed at each station in the Plum Island Estuary during the May-July 2018 time period (not available for 2017 sampling). Turbidity measurements were collected with a sampling rate of 1 Hz for 1-2 min at each station, and the average was calculated after removal of outliers (any data above 2 times the standard deviation). The YSI ProDSS was also equipped with a GPS, and in some cases the YSI ProDSS was used to make underway measurements just below the surface (0.1 - 0.2 m depth) from the bow of the boat and away from bubbles produced during the boat’s movement.

Spectral remote-sensing reflectance (Rrs(l)): The spectral remote-sensing reflectance of the water, Rrs(l), was measured wherever water samples for SSC were collected. Two different approaches were used. For a total of 14 stations, Rrs(l) was determined from vertical optical profiles of upwelling radiance and downwelling irradiance acquired with a Biospherical® Compact Optical Profiling System (C-OPS) (Morrow, 2010). The C-OPS was deployed off the side of a zodiac (Plum Island Estuary stations) or from the stern of the research vessel R/V Auk (Massachusetts Bay stations, and the optical profiles were always performed at least 20 m from the boat and on the sunny side in order to avoid the boat’s shadow). The optical profiles were then used to derive Rrs(l) just above the surface and at 19 wavelengths from 305 nm to 780 nm (including red bands at 625 and 665 nm) using well-established protocols described in Antoine et al.( 2013) and Hooker et al. (2013). At least three profiles were done at each station, and the average Rrs(l) for the three profiles was used. For the other 26 samples (all in Plum Island Estuary), Rrs(l) was determined at 1 nm spectral resolution from 350-1000 m using an ASD® Handheld-2-Pro spectrometer and following the recommended procedure described in Mobley (1999). Briefly, the handheld spectrometer was used to measure radiance (here in digital counts) from three targets at each station: 1) reflected sunlight from a Spectralon® plate (average of ~10 measurements), 2) skylight measured at 40o from the zenith and at 135o from the Sun’s azimuthal plane (average of ~10 measurements), 3) water radiance measured at an angle of 40o from Nadir and at 135o from the Sun’s azimuthal plane (average of ~10 measurements). All measurements of the three targets were made within 5 mins while illumination conditions were stable (e.g., no variable cloud conditions). Note all ASD measurements were made during relatively clear-sky conditions, with occasionally some high cirrus clouds. Remote-sensing reflectance were estimated as in equation: