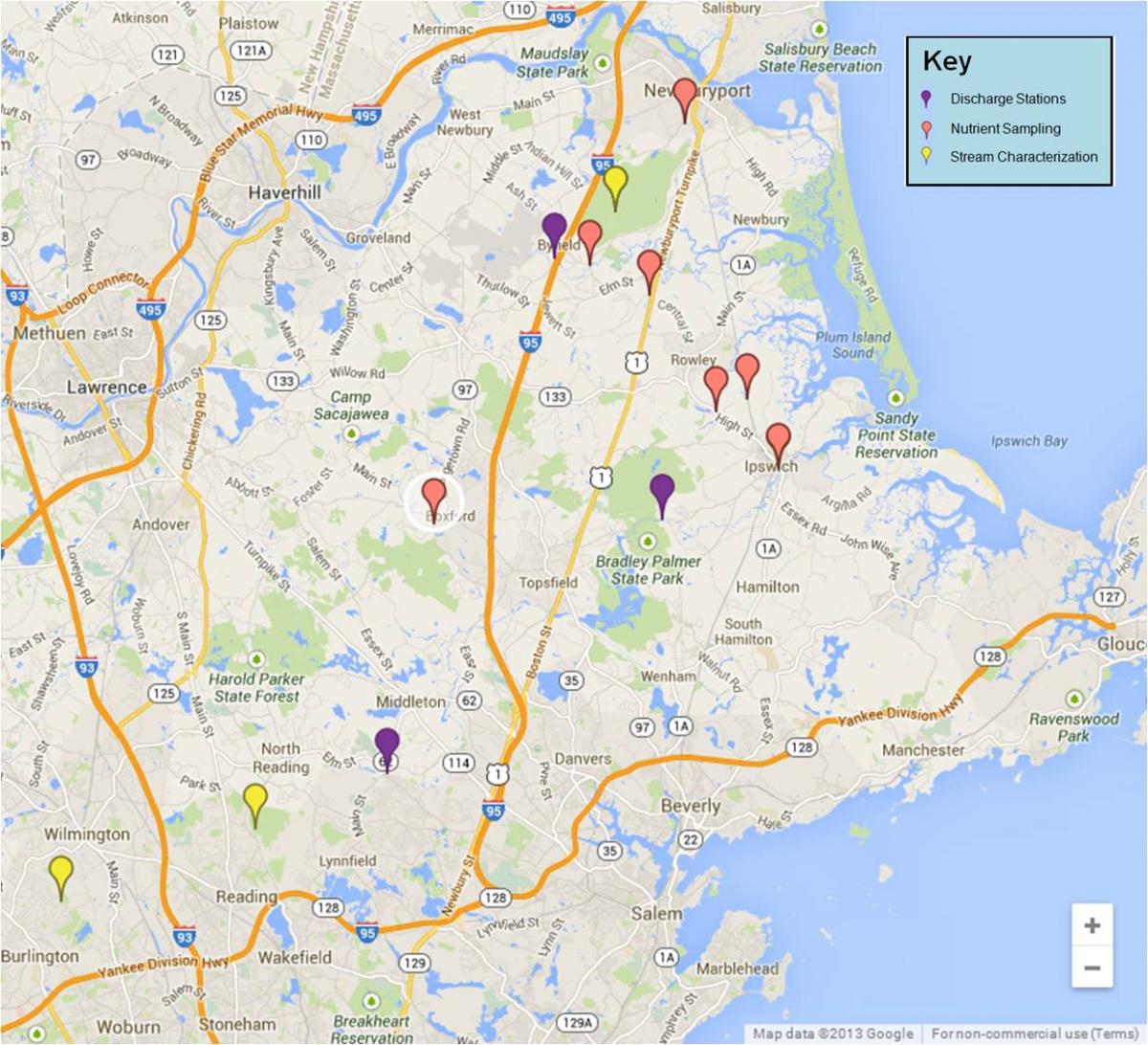 The Rowley River watershed is small and drains directly into Plum Island Sound. The river has one wastewater discharge site and no mainstem dams. This watershed is entirely low lying coastal plain and predominantly salt marsh. There is some rural-residential development within the upper watershed.

The Ipswich River watershed is the largest and most developed. The watershed is primarily coastal plain. There are three mainstem dams, one major water treatment plant in the town of Peabody as well as eight smaller wastewater discharge sites.

Almost 25% of the Ipswich watershed is set aside as conservation land, the rest is primarily suburban-residential. Boston bedroom communities have been rapidly encroaching along the southern portion of the watershed. The USGS maintains two gauging stations on the Ipswich. The one at the mouth of the river has a mean discharge of 249 cfs. Dam samples from the Parker River and Ipswich River have been taken approximately monthly since 1993, and at the Egypt River since 1999 to determine loading to the Plum Island estuarine system from the watershed. 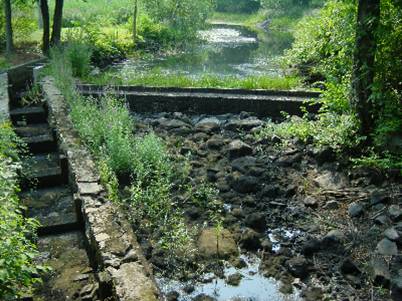 Benthic sampling sites fall into two categories. Some sites have been sampled for studies of benthic metabolism as well as for porewater and solid phase analyses; data from these metabolism studies may be found in the “flux” file (BEN-PR-Flux).

Porewater and solid phase data from these sites plus additional sites may be found in the “sediment” files (BEN-PR-Sed-Porewater and BEN-PR-Sed-Solids).

On a transect from the mouth of Plum Island Sound to the head of the Parker River, the five stations occur as follows. Station R5.5 (previously called Station Rowley) is located on a sand flat just outside the mouth of the Rowley River in Plum Island Sound on Hog Island Point, 5.5 km from the mouth of the Sound. Station R5.5 is one of our long-term monitoring sites. This station is in a very dynamic, high salinity region (25-34 psu) and has sediments composed almost exclusively of sand.  Ripples about 10 cm long attest to the strength of the tidal currents in this area, which are of sufficient magnitude to create sand waves 10-20 m long.  Station R5.5 is representative of the very large benthic area covered by Plum Island Sound (> 6 km2), and is strongly influenced by oceanic input. The nextflux station upstream is Station P14 (formerly P5), located about 14 km from the mouth of the Sound and just downstream of the confluence of the Mill River with the Parker River. Sediments at Station P14 are silt/clay and fine sand, and support high densities of the soft-shelled clam, Mya arenaria, as well as other infauna. We consider Station P14 to be a mid-salinity station, where salinity may range from as low as8 psu up to 32 psu over the course of the year, depending on freshwater discharge. Station P22 is 22.25 km upstream, or about 1.7 km downstream of the dam at the head of the estuarine portion of the Parker River. Station P22 has been the most frequently visited station in the Parker River and is another of our long-term monitoring sites. It is located in the oligohaline portion of the estuary, with salinity typically ranging from 0 psu to nearly 20psu during mid to late summer when freshwater input is lowest. Sediments here are muddy silts andclays. The intertidal banks at this site are colonized by benthic diatoms. However, few large infauna are present. In 1996, we sampled an additional station in the upper Parker, Station 23.5. 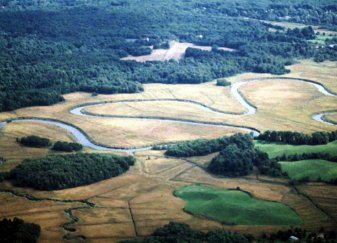 Additional sites that have been used to collect samples for porewater and solid phase sediment data are Stations P11 and P24 on the Parker River. Station P11, formerly referred to as “Town Landing” due to its proximity to the Town of Newbury's public boat ramp, is in the lower reach of the parker River, only 10.7 km upstream of the mouth of the Sound. Salinity ranges from over 20 psu to full strength seawater at this site, and sediments are coarse to fine sands and silts. Station P24 is at the uppermost end of the estuarine portion of the Parker River, just below the dam.  Salinity is typically less than 5 psu at this site, but may reach 15 psu or more when freshwater input is minimal. Sediments are fine silt/clays, similar to those at P22.

The three sites sampled for nutrient flux studies in the Egypt River are Stations E13, E13.5, and E14, located 13, 13.5, and 14 km, respectively, upstream from the mouth of the Sound. The Egypt/Rowley Rivers receive less freshwater input than does the Parker River.High tide salinities under normally low freshwater discharge are about 15, 10 and 7 psu, respectively. However, in 2000,discharge was unusually high and high tide salinities dropped to 5, 3, and <2 psu. Sediments at Stations E13 and E13.5 are peaty with silts and some sand, and those at P14 are somewhat sandier. The intertidal banks at E13 and E13.5 support high densities of benthic diatoms. In contrast to stations in the upper reaches of the Parker River, all three Egypt River stations support a diverse fauna, including the active bioturbator Nereis diversicolor.

Several benchmarks have also been established within the Plum Island marsh system, near the Rowley Field House, on Law's Point, and on Holy Island. 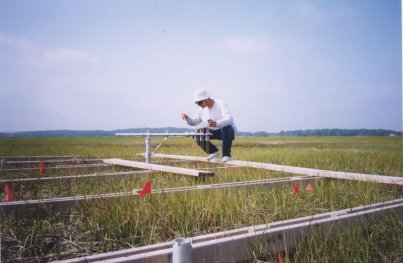 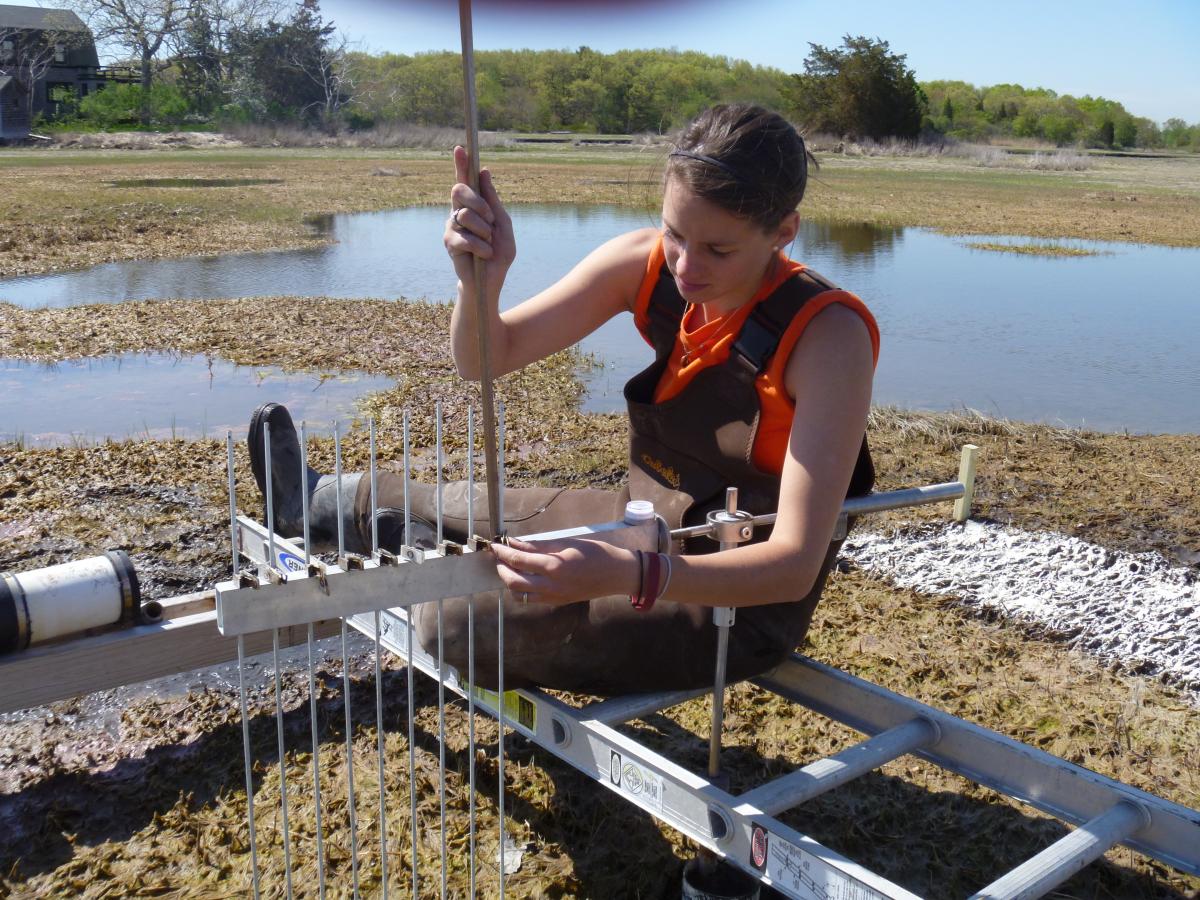